How To Hit The Jackpot

It can be a confusing time when you are forced into choosing what you want to do for the rest of your life without ever having the opportunity to actually do it. When I was 18 everyone told me that I needed to choose right now. I would always say “I have no idea.” I was forced to choose and of course, I chose wrong. I wasted time and money going to school to be an elementary school teacher. Education is a wonderful thing and I respect educators but I was miserable. I wanted to be a writer but of course “writers can’t make money. You’ll never find a job.” I had no direction, no experience and so I was stuck for a year.

The Challenge Program Inc. (TCP) partners with businesses who want to transform that scary part of career exploration into something enjoyable and helpful.

A recent graduate of Connellsville Area CTC, Garrett Felgar went through an application process for a summer internship with Williams Energy (Williams sponsors TCP at Connellsville CTC). He had to write an essay and go through an interview where it was narrowed down to three candidates. Williams Energy then interviewed them individually which is when they chose Garrett as the best fit for their company.

During his time there, he got to use his previous knowledge of wiring from his two years at the CTC to assist them in the day to day operations and maintenance of their company. Garrett says his days there consisted of various jobs to make sure everything was up and running which ranged from pipes and filters to gas and diesel engines.

His experience at Williams Energy, he says, has been amazing. “I couldn’t speak highly enough of the company. The managers are approachable and helpful. Everyone you walk past says ‘hi.’ They treat their employees well.” Hearing him talk so highly about work, where most people dread going each day while they complain about their horrible bosses, was relieving. His positivity gave me a sort of boost and hope that students can find places to work that make them happy. 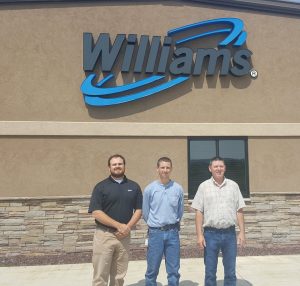 The internship was only supposed to last for the summer but to his surprise, they asked him to stay with them until November. “The regulations make me feel safe here. They let you try new things and everyone knows me by name. I’d love to become a full-time employee for them so I’m excited I was offered this extension.”

When talking about The Challenge Program, Inc. (TCP) Garrett says that he had never heard of the program before he got to the CTC because he attended a high school that does not participate in TCP, but he is glad that he got involved. “[TCP] brought the opportunity to me. That opportunity is now giving me a chance to start a career.” He says that he really likes the award categories because “everyone can fit into at least one or more categories so everyone has a fair chance.” This concept of fitting in does not always happen easily for high school students and so if they feel as though they can become a part of something and then get rewarded for it, that’s a win.

Garrett speaks highly of the program when asked if he would recommend it to schools or businesses not involved saying, “Definitely. Even without the money, it opens career paths. Now I have my foot in the door and experience behind me. Companies can now look at me and say at least he has experience.“

In addition to his future goals and becoming a full-time employee at Williams because “no one could complain about working here” Garrett wants to eventually become a supervisor. The biggest things he took away from the experience were safety and what large companies look for in an employee. He says that “The internship gave me an opportunity to see how to build a career rather than just a part-time job.” This is a young man who wants to work and has this opportunity out of high school that most students will not see until they are graduating college.

Garrett is just one example of the many possibilities TCP can give to students looking to build careers rather than moving from part-time job to part-time job like I have done for most of my young life. At the age of 17 I got my first job at a grocery store. I kept that job but also moved on to more when I realized that college was going to drain my bank account. I have been a cashier, librarian, pretzel maker, funnel cake chef, office assistant, ride operator, and service desk employee. Getting experience in the field I wanted to go into at the age of 17 or 18 instead of 21 would have lessened my amount of stress, given me more money, and given me more confidence. Students deserve this opportunity in their school and businesses often come away feeling like they gained way more than they gave to us. Seeing the reactions of students and businesses after a success story is kind of addicting. Not to mention that when TCP came into my life, I got to be a writer. I come to work and do many things but writing is always one of them.

Why not let more students feel like Garrett when he tells us “I feel like I hit the jackpot.” With that statement, I realized that I had been struggling to find a way to describe how I feel here and when he said that, in my head I was thinking that I feel the same way.