Alex Pindro is a senior at Forbes Road Career and Technology Center where she recently earned a $200 award from The Challenge Program, Inc.(TCP) for Community Service. Alex studies Landscaping at the CTC and thoroughly enjoys having the opportunity to do so, in the future, however, she sees herself going into nursing. Her love for helping others is pushing her toward that goal. She tells us, “I’d like to help more people. Landscaping will always be there for me as a hobby or something on the side.”

With all that Alex participates in, it comes as no surprise that she was a Community Service Award recipient. From FFA (Future For Agriculture), to leading younger 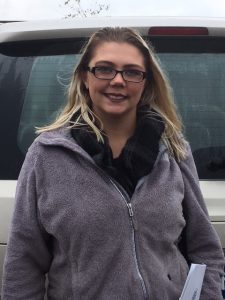 students on tours and preparing them for high school, she is always looking to volunteer her time. When talking to Alex she told a story of how she came to an old friend’s aid. “We used to be really close friends but we drifted apart. Her house had burned down recently so I helped collect clothes and things for her family. I would still always do anything to help.”

“I wasn’t doing so well [in school] but community service was important to me. TCP helped me push forward in ways that I thought I couldn’t”. Alex tells us honestly that she did not even think the $200 dollar checks were a real thing until she received one herself. “I was actually a volunteer for the assembly. I was sitting there worried about so many personal things and then my name was called as an award winner. The TCP representative described all of the things I do and it made me realize that I do a lot more than I thought.” Alex’s guidance counselor described the moment as “perfect” when recalling that afternoon. “Alex started crying. It was moving.”

Alex explained to us why the award was so emotional for her. “My mom and I had been going through a rough patch. Before school started my car had to be put in the shop and needed $1,000 worth of work. So the $200 went towards the car and now we will have our car by the end of the month.”

When asked about TCP and advice she has for students Alex says, “Even if you don’t think you have a chance to do it just try anyways. It will help you as a person even if you don’t get the money. TCP isn’t really about the money. It’s more about helping you be a better person.” In one word Alex describes TCP as, “…powerful because it helps people achieve more than what they thought possible. Someone acknowledges them and that’s when they know how much [good] they are actually doing.”

Forbes Road CTC is sponsored by Forbes Hospital/Allegheny Health Network. Alex says her business sponsor has impacted her for the better. “Forbes Hospital is where I always went for help and medical attention so having them here [as a sponsor] has always been comforting. My experiences with nurses has only been with them. Through television shows, career exploration, and my connections to Forbes Hospital, the medical field began to be something I was interested in. Getting to work with the COO, Ms. Bragg, was pretty special.”

“I have all A’s now. I am trying to keep above a 3.0 GPA. It was tough on me when I was paying for clothes that weren’t name brand and I was at a new school. Once I came to Forbes Road CTC I just felt okay. The Challenge Program and Forbes were here for me when I really needed it. Thank you so much. I would love to work for a company like Forbes Hospital who does great things for kids.”